ASK A QUESTION
Medzone  >  Hormones   >  Is it Safe to Take HRT and Birth Control Together? 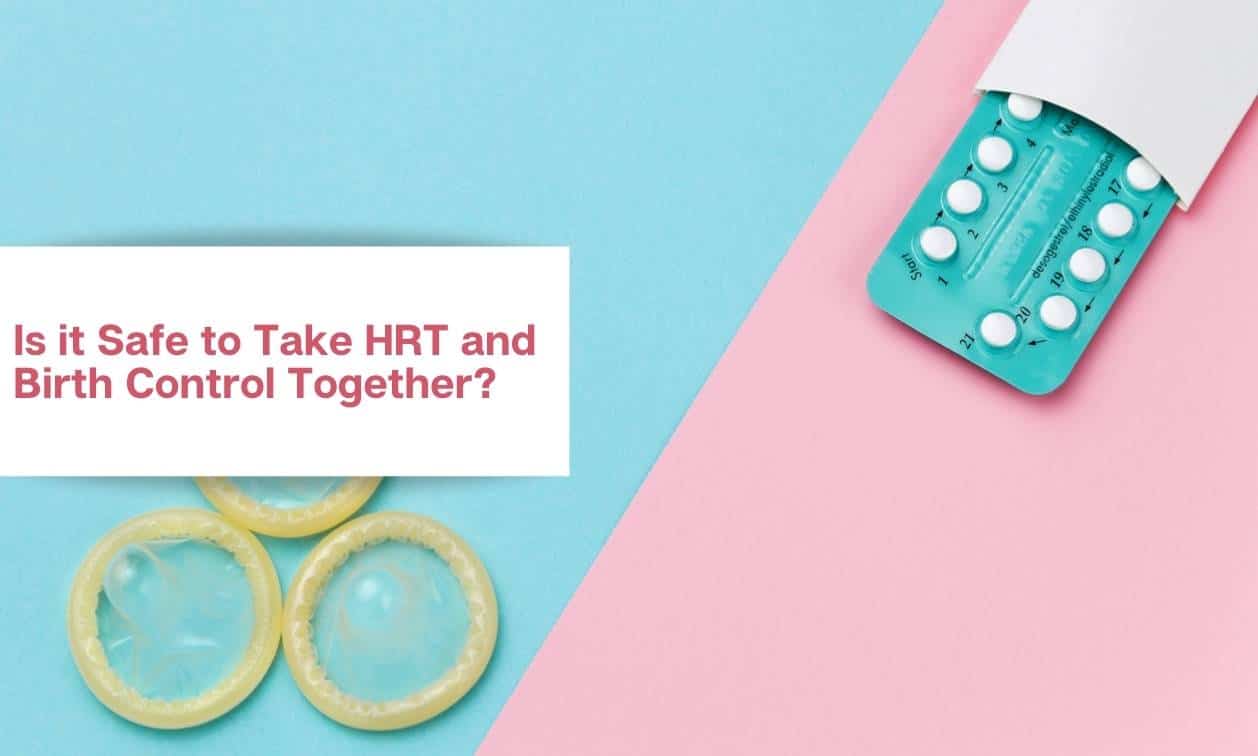 Is it Safe to Take HRT and Birth Control Together?

Women often wonder if it is safe to take hormone replacement therapy and birth control together.

The reason for the confusion is that both hormone replacement therapy and birth control pills or oral contraception involve “replacing” or increasing female hormone levels. However, usually, the two treatments are used for different purposes – birth control pills to prevent pregnancy in fertile women, and hormone replacement therapy, or HRT, used to alleviate menopausal symptoms for women who are no longer ovulating.

But adding to the confusion, sometimes “birth control” pills are used for purposes other than to prevent pregnancy, when a specific dose of hormone therapy is required, such as in women who are experiencing early menopause or people who are transitioning to female.

As to the question of “is it safe to use birth control pills and HRT at the same time,” that all depends on the individual circumstances and why a woman who is still fertile and taking birth control also might require HRT. In some cases, it may be okay to do both depending on the HRT required, or your doctor may recommend some non-hormonal birth control such as condoms, internal condoms, diaphragms, spermicides, or an IUD.

In older women who are in perimenopause and who are experiencing menopausal symptoms but are still getting their periods and are prescribed HRT, taking birth control as well is often recommended to prevent pregnancy, as the hormones in HRT that are used to alleviate symptoms such as hot flashes and night sweats are usually not present in high enough amounts to prevent pregnancy.

What is Birth Control?

Hormonal birth control prevents pregnancy by stopping ovulation, so there is no egg in the uterine canal present for sperm to fertilize. Non-hormonal types of birth control are usually “barrier” methods that prevent sperm from reaching an egg.

What Types of Birth Control Can You Take Along With HRT?

Once women are over the age of 40, birth control becomes a bit of a more complicated issue. While women in their 40s usually are still capable of becoming pregnant, the hormonal changes of menopause are already beginning, which can put women as they approach the menopausal years at greater risks of breast cancer, other gynecological cancers, and hormone-related conditions.

In addition, middle-aged women who are still menstruating and, therefore, able to become pregnant could already be experiencing some of the debilitating symptoms of menopause, such as night sweats and hot flashes. This is known as perimenopause, and such women who may have been prescribed HRT for those symptoms but are still sexually active must carefully consider their birth control options so as not to throw their hormones further off balance.

Obviously, a woman’s fertility declines with age. But most women can become pregnant well into their mid-50s. However, birth control in this group, particularly for those women who may already be on HRT, can be challenging.

The suitability of any contraceptive method has to be assessed on an individual basis, that considers the woman’s age, medical history, hormone levels, and contraceptive preferences.

Keep in mind, too, that for women in this age group, birth control pills or other hormonal forms of birth control can have other benefits besides preventing pregnancy, such as alleviating painful periods or other menstrual issues.

For women that cannot take birth control pills while they are on HRT, the IUD is usually the most recommended method of birth control. Since women over 40 who may be on HRT but still ovulating are less fertile than when they were younger, the IUD is much more effective than it can be in younger women, plus most IUDs have an insertion life of about ten years, so, if it is prescribed and inserted when a woman is 45, it can be left in until she is 55 and will likely have stopped menstruating by then.

Can HRT be Taken Instead of Contraception?

While both HRT and birth control pills involve increasing the levels of estrogen, HRT is NOT considered to be a contraception method in women who are still menstruating and have not gone through menopause yet. The levels of estrogen in HRT are typically not high enough to prevent conception in still-fertile women.

Women who are taking oral contraception obviously have not yet gone through menopause. Taking birth control pills to prevent pregnancy needs higher levels of hormones to prevent ovulation than is typically used in hormone replacement therapy. The usual dose of HRT is not a high enough strength to stop ovulation, and therefore hormone replacement therapy should not be considered a form of birth control.

HRT for women that is used to treat menopausal or perimenopausal symptoms can be prescribed as pills, creams, dermal patches, or subdermal pellets placed under the skin.

Does HRT Affect Fertility in Women?

Estrogen and progesterone replacement is prescribed by doctors to treat a number of different conditions, including perimenopause. But they are also used in the treatment of some types of infertility.

Birth control, menopause, and hormone replacement therapy can be complex. Women who are still capable of becoming pregnant but are in need of HRT to treat perimenopause or, for some other reason, need to discuss their best birth control options with their doctors.