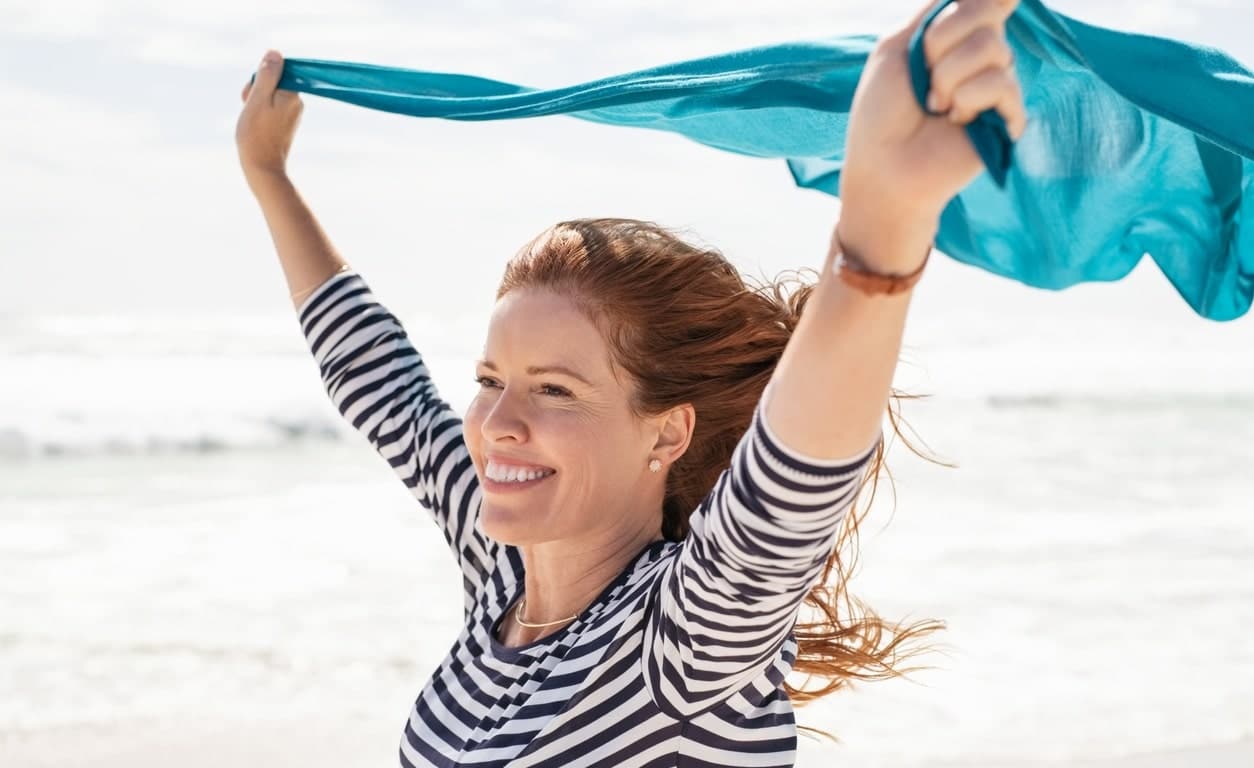 At around age 40-55, many women begin to experience the symptoms of a condition called menopause, defined by at least 12 months without a period. However, as we will discuss here, some women develop menopausal symptoms much earlier, while others deal with the effects of menopause deep into old age.

Human growth hormone, or HGH, is intricately involved in the aging process, including during menopause. HGH levels can have a significant impact, therefore, on a woman’s experience during this transition period. Let’s get into the various stages of menopause, answer some of the most common questions that women have about the process, and discuss the anti-aging, hormone optimization strategies you can use to mitigate any menopause-related symptoms that you experience.

Aging and Menopause: Why Does It Occur?

Menopause is a natural process in which the ovaries stop releasing a monthly egg for fertilization and a woman can no longer become pregnant. Accordingly, the levels of the two female sex hormones – progesterone and estrogen (estradiol) – decline precipitously. This hormonal shift is what drives the symptoms of menopause in women.

Over the course of a woman’s life, as the chart below shows, estrogen levels peak around early adulthood following puberty, then hold steady until menopause begins. The red line indicates typical estrogen levels in women over their lifetime. In the United States, the average age at which a woman develops menopause is 52. Doctors break the process up into three distinct phases that we’ll delve into in the next section. 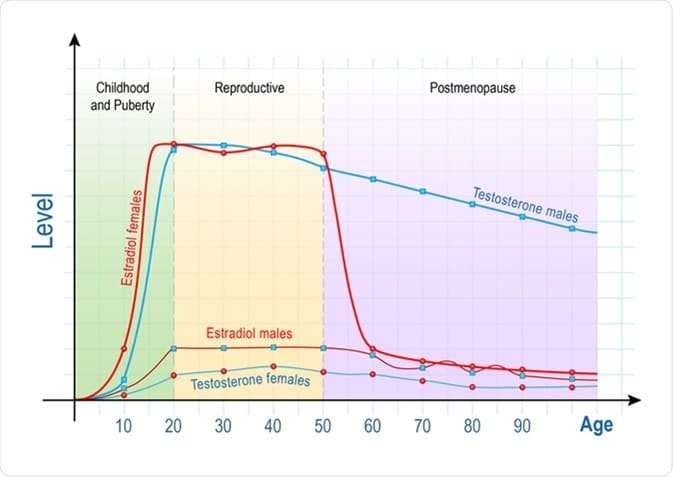 The Three Stages of Menopause

Let’s take a look at each stage of menopause in detail.

Perimenopause is essentially the interim period between a woman’s fertile years and menopause. On average, perimenopause lasts four years. At this stage, a woman will continue on her monthly cycle. However, although she will still get her period, she may begin to notice that they are irregular, often coming later than expected. The volume of blood may also change. The telltale signs of perimenopause are:

The duration of perimenopause varies from woman to woman; some experience these symptoms for only a few months before entering menopause while other women can remain at the perimenopause stage for years. 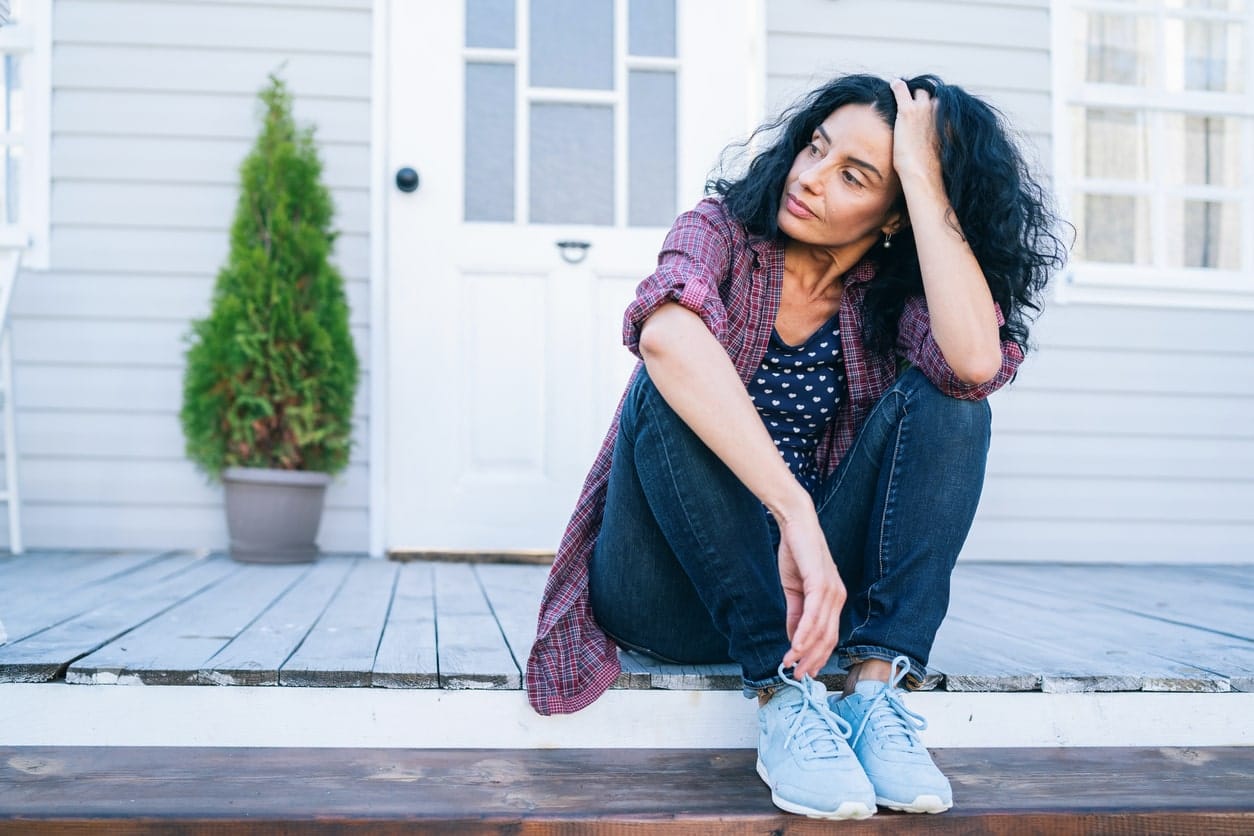 Biology defines the end of perimenopause and the beginning of menopause as having gone 12 months without a period. Levels of estrogen, HGH, and other critical hormones drop while cortisol, the stress hormone, increases.

The common signs of menopause are:

Postmenopause begins after a woman’s period has stopped for one full year (12 months). At this stage, the symptoms of menopause listed above will begin to fade for the majority of women. In some rare instances, the symptoms of postmenopause can extend up to 12 years after the conclusion of menopause. At this stage, the deleterious effects of unbalanced hormones significantly raise the risk of serious health conditions such as osteoporosis (clinically diagnosed loss of bone density), sarcopenia (shriveling muscles), and heart disease.

Hormone replacement therapy (HRT) with estrogen and HGH correct the age-related hormonal imbalances resulting from menopause, improve quality of life, and minimize the risk of serious complications following the transition into postmenopause. 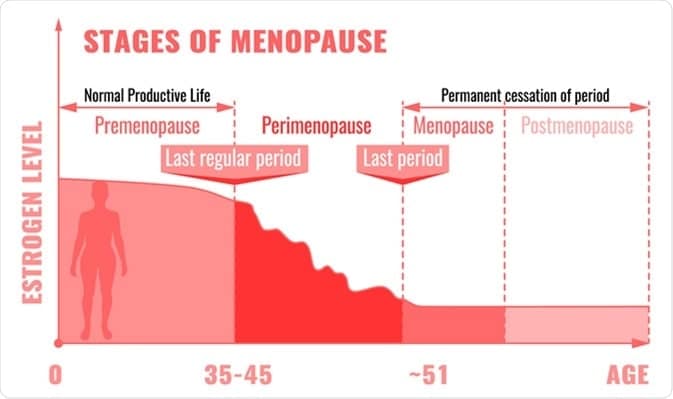 Frequently Asked Questions (FAQs) About the Stages of Menopause

Let’s break down the most common questions that women have regarding the stages of menopause and how they affect health.

How long does late-stage perimenopause last?

Late-stage perimenopause, the period leading up to menopause characterized by rapidly worsening symptoms in many women, usually lasts about six months.

What signs indicate the end of menopause?

The following signs indicate that a woman is nearing the end of menopause:

How long do the stages of menopause last?

Every woman is different, but here are the typical experiences of women in terms of timeframe for menopause:

Has the average age at which women begin to experience menopause changed in recent years?

No. While there is evidence that the average age at which a girl begins her period (menarche) has decreased, the average age for beginning menopause (51 in the US) has remained steady for decades.

How long does the entire process of menopause take from start to finish?

Every woman is different based on her unique physiology, but, as a general rule of thumb, 10-15 years is the average timespan for all three stages of menopause from start to finish. However, the period of postmenopause, during which symptoms of menopause may persist for some women, lasts throughout the lifespan. 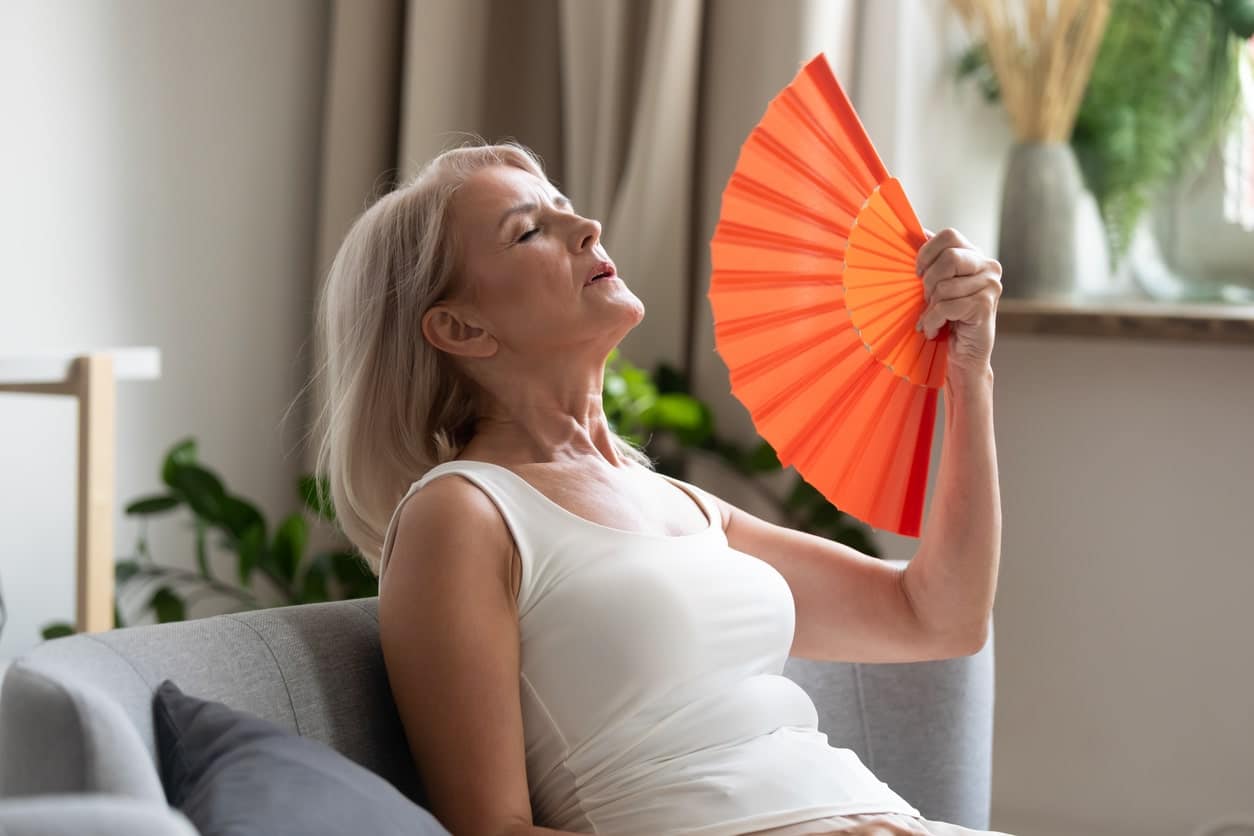 How Does Human Growth Hormone Affect Women’s Bodies at Each Stage of Menopause?

Human growth hormone (HGH) is a critical hormone produced by the pituitary gland that performs important work in women’s bodies before, during, and after menopause, including:

Here is a look at how HGH affects each stage of menopause.

Age-related HGH loss for many women begins in perimenopause and, left untreated, can lead to debilitating symptoms that lower quality of life. During perimenopause, falling HGH levels contribute to: 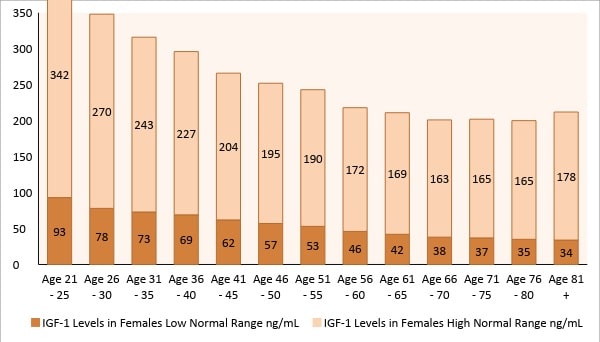 The symptoms associated with perimenopause listed above will likely become more noticeable during menopause. The hormonal changes during menopause, including drops in HGH levels, also contribute to:

Loss of bone density is one of the common symptoms of menopause in women.

Osteoporosis is so closely linked to menopause, in fact, that 5-20% of all women (depending on ethnicity) over the age of 50 have osteoporosis. The good news is that human growth hormone (HGH) replacement therapy can help fortify bone strength and reverse and prevent osteoporosis, According to research from the Journal of Clinical Endocrinology & Metabolism, “for years after it was administered, growth hormone continued to reduce the risk of fractures and helped maintain bone density in postmenopausal women who had osteoporosis.”

Although the more disruptive symptoms of menopause tend to slowly subside during postmenopause, the risk for osteoporosis and sarcopenia is greatest at this stage. HGH — by virtue of its growth-promoting properties as an anabolic hormone — can prevent age-related bone loss. Even a decade after receiving HGH replacement therapy, the evidence shows that postmenopausal women who receive it have reliably thicker, denser bones.

Here are specific tips for managing the respective heath challenges that menopause poses to women.

“Metabolism” refers to the body’s ability to efficiently process, store, and use energy. Women experiencing menopause are at much greater risk of developing poor metabolism – including the development of a serious condition called metabolic syndrome — than women who still menstruate. Over time, poor metabolic health can contribute to potentially fatal cardiovascular events like heart attack or stroke.

Keep your metabolism humming along by:

Calcium and vitamin D are two essential nutrients that women’s bodies require in adequate amounts during menopause. Simple blood tests can show your levels. Calcium deficiency is a primary contributor to the development of osteoporosis in women experiencing menopause.

In addition to keeping bones strong and healthy by facilitating calcium absorption, vitamin D supplementation has a wide range of other benefits: 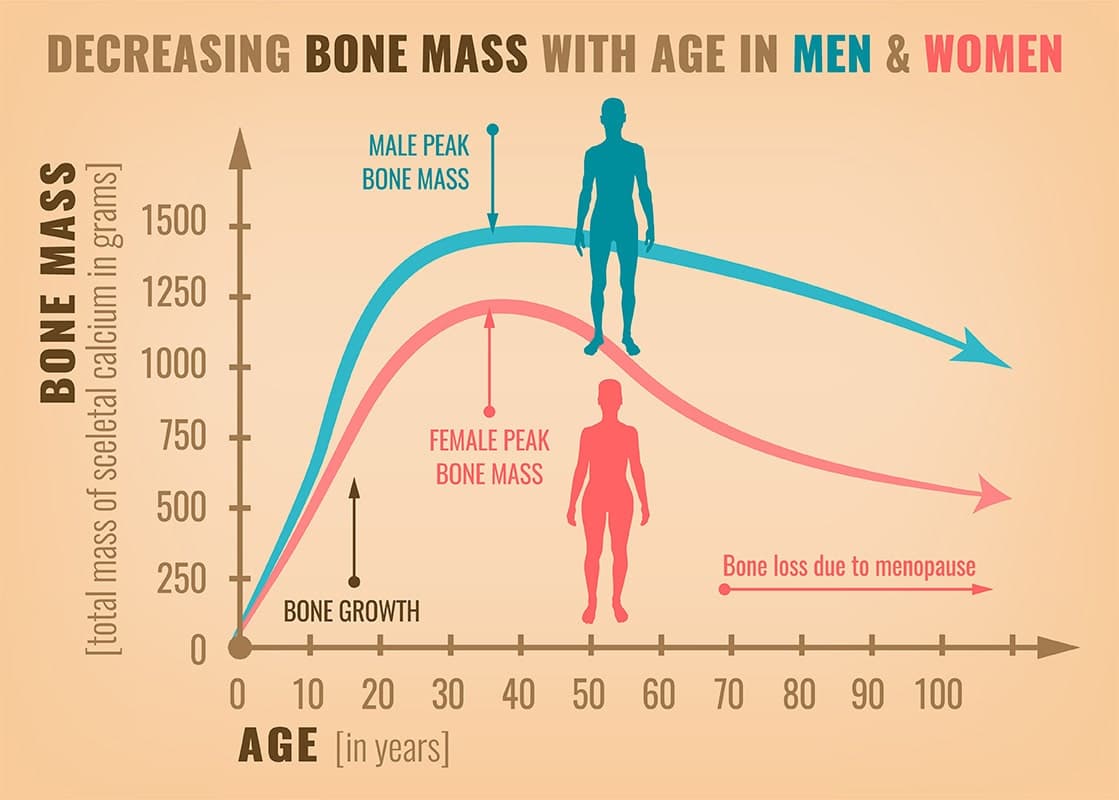 Next to a healthy diet, taking a high-quality vitamin D and calcium supplement is the best way to ensure that you maintain high levels of each from a nutritional perspective. General guidelines for supplementation are:

Don’t Smoke (or, if You Smoke Already, Then Quit)

Smoking worsens the symptoms of menopause and may trigger early onset of the condition in women. Tobacco contains chemicals known as “endocrine disrupters” – substances known to affect hormone function, including estrogen and HGH levels in women.

Quitting smoking is important for health at any stage of life, but putting down the cigarettes is critical during the menopausal transition stage of life.

Smoking worsens the symptoms of menopause and may trigger early onset of the condition in women.

Due to the protective and regulatory effects of human growth hormone, maintaining healthy HGH levels is an important aspect of any strategy to combat the symptoms of menopause. HGH replacement therapy, along with a healthy diet and exercise, can keep HGH levels in the optimal range. 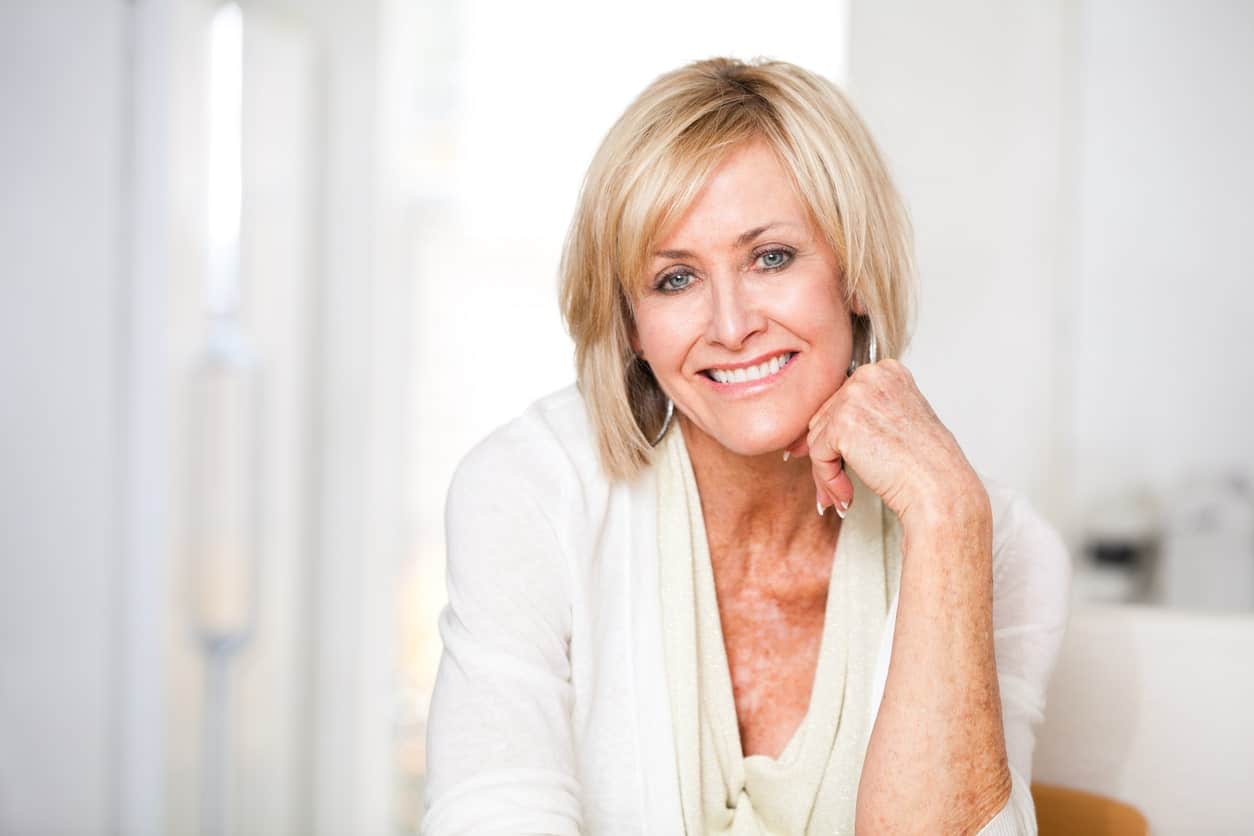 Stress and anxiety – which might be directly caused by worrisome and unpleasant menopause symptoms – can actually worsen them and create psychological distress in women. Mindfulness/relaxation techniques can help.

Most of us, menopausal or not, breathe incorrectly. To deliver the maximum concentration of calming oxygen to the tissues and organs that require them, you can perform a technique called “belly breathing” or “diaphragm breathing” in which you draw air into the deepest portions of the lung.

Stay as Active as Possible

Staying active (getting at least 30 minutes of moderate to high-intensity exercise daily) can help alleviate the symptoms of menopause by:

Strengthen Your Pelvis With Kegel Exercises

How Does HGH Ease Menopause Symptoms and Allow for a Smooth Transition for Women?

Due to the concerning decline in critical HGH levels seen among menopausal women, HGH replacement therapy – in combination with the other techniques that we’ve explored here – is an ideal strategy for maintaining your wellness during menopause. Keeping HGH levels high can protect your bones and muscles from age-related deterioration, boost energy levels, keep stress hormone levels in check, and neutralize many of the symptoms associated with menopause.