ASK A QUESTION
Medzone  >  HGH   >  The Difference Between Ipamorelin, Sermorelin and HGH 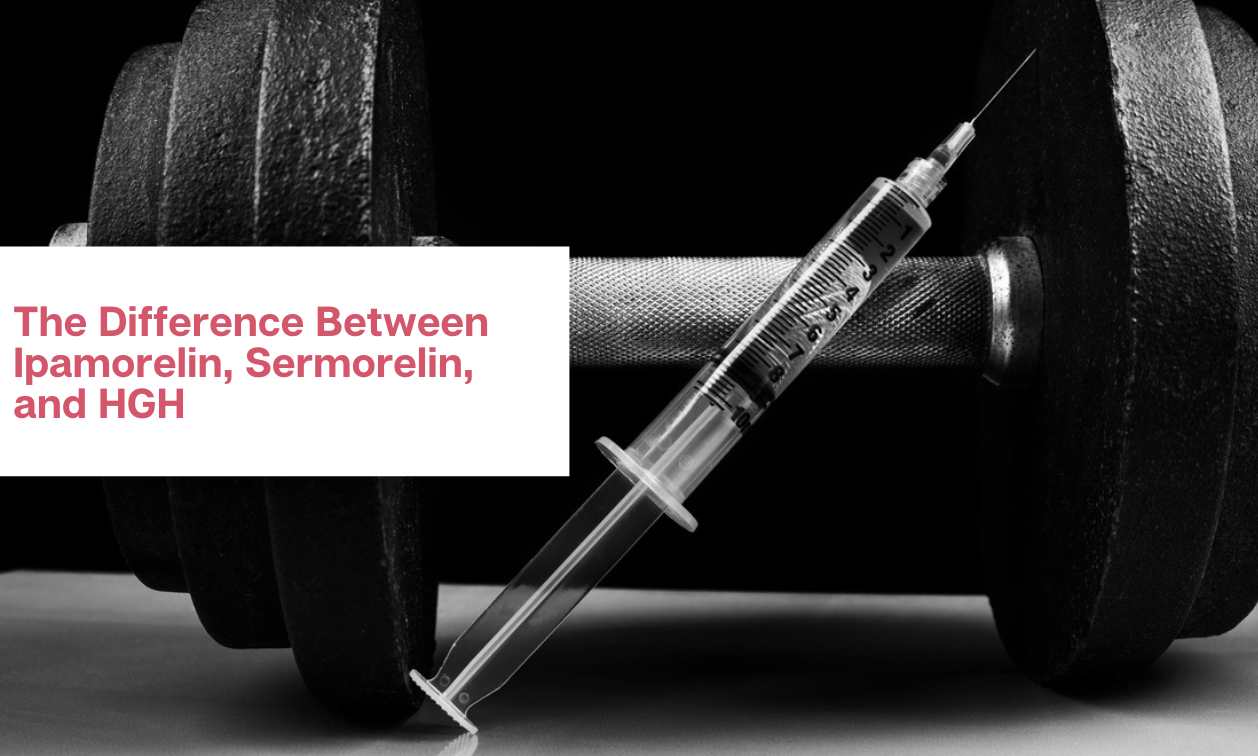 The Difference Between Ipamorelin, Sermorelin and HGH

Ipamorelin, sermorelin, and HGH are all used to treat men with growth hormone deficiencies. What are the differences, and how do you know which is right for you?

Human growth hormone, or HGH, is one of your most critical hormones. HGH is responsible for the health and growth of every cell and tissue in your body. Beyond that, HGH plays a vital role in your metabolism, your ability to build and maintain muscles, your bone health, and even your sex drive and sexual stamina.

As important as HGH is, it is an unfortunate fact of life that HGH levels drop as you age. This can lead to what is known as “adult-onset” or “age-related” growth hormone deficiency.

Peptide therapy, such as sermorelin and ipamorelin injections, raise your HGH levels by stimulating your body to produce more HGH. For patients who qualify, sermorelin or ipamorelin therapy can be a lower-cost alternative to actual HGH injections.

Both HGH injections and peptide injections like ipamorelin and sermorelin require a doctor’s prescription.

Of the two peptide therapies, our doctors have found sermorelin injections to be more effective at raising HGH levels in patients with age-related HGH loss.

Only your doctor can determine which is right for you.

Ipamorelin acts by binding with specific receptor sites within the pituitary gland. In doing so, it emulates the action of the natural growth hormone releasing hormones which ordinarily stimulate the pituitary to make and release HGH as needed by your body.

What Was Ipamorelin Created For?

Ipamorelin, as are all synthetic growth hormone releasing peptides, was created to offer patients suffering from growth hormone deficiencies an alternative treatment to growth hormone injections. In some cases, where HGH levels are only slightly below normal, growth hormone peptide therapy such as ipamorelin therapy may be enough to raise HGH levels into the normal range and provide relief of symptoms.

What Are the Benefits of Ipamorelin?

Ipamorelin is a form of growth hormone therapy. Therefore, generally speaking, it has many of the same benefits as HGH. These include the following:

What Are the Side Effects of Ipamorelin?

Ipamorelin is approved by the FDA to be prescribed for the treatment of growth hormone deficiency. However, as with any prescription medication, Ipamorelin has some potential side effects. The most common side effects are injection site reactions such as swelling, rash, or inflammation.

Other possible ipamorelin side effects include:

Ipamorelin was created to mimic the action of naturally occurring growth hormone releasing hormones; therefore, it can and does increase HGH levels. Whether it can increase the levels enough to alleviate your symptoms of growth hormone deficiency can only be determined by your doctor.

Sermorelin reacts with different specific receptor sites within the pituitary gland. These receptors tend to be more sensitive and more reactive than those for ipamorelin, so sermorelin tends to be better at causing the pituitary to raise HGH levels.

What Was Sermorelin Created For?

What Are the Benefits of Sermorelin?

Like Ipamorelin, sermorelin injections are a form of prescription growth hormone therapy. Therefore, generally speaking, sermorelin has many of the same benefits as HGH. These include the following:

What Are the Side Effects of Sermorelin?

Sermorelin is FDA approved and is generally regarded as safe. When used properly, it has few side effects. The potential side effects of sermorelin are much the same as those for ipamorelin, such as:

As already discussed, ipamorelin and sermorelin are both growth hormone-stimulating peptides that can be used to treat qualifying adults with age-related growth hormone deficiency. They both work relatively the same way, and they both have been designed to treat HGH loss by stimulating your body to make more HGH. Generally speaking, they both provide similar benefits.

The difference lies in their ability to stimulate that release. The hormone receptors that react to either peptide tend to be more reactive to sermorelin, and therefore, sermorelin tends to be more effective in raising HGH levels.

Your doctor will help to decide which one will produce the most desirable effects for your presenting symptoms.

The following chart provides a snapshot comparison of the two drugs.

All prescription growth hormone injections are a form of the same drug known as somatropin. Somatropin is made from human DNA, so it is bioidentical to the human growth hormone normally made by your pituitary gland.

HGH injection therapy is prescribed for children who are not achieving normal growth milestones for their age. HGH is also indicated for adults who are exhibiting growth hormone deficiencies that have continued from childhood or who are experiencing age-related or adult-onset GHD.

HGH therapy is also used to treat the muscle wasting that occurs from HIV/AIDS and other degenerative muscle diseases.

Why Is HGH Therapy Beneficial for Your Health?

HGH is responsible for the growth and repair of every cell and tissue in your body. As your HGH levels decline with age, your body can no longer replace as many cells as die off. This “imbalance” results in many of the conditions we think of as “growing older.” HGH therapy can replace what time and nature take away, increasing your HGH levels and returning more youthful vitality.

HGH is also beneficial to your health because it can raise your metabolism, reduce your bad cholesterol levels, decrease your risk of heart disease and help you to lose weight. HGH injections also strengthen bones, help you build muscle, and reduce the risk of osteoporosis and osteoporosis-related fractures. HGH also has a positive effect on mood, cognition, memory, and emotional health.

Are There Any Side Effects of HGH Therapy?

Growth hormone replacement injections are generally regarded as safe and have few, if any, side effects when used as directed. However, as with any medication, HGH has some potential side effects. The most common side effects of HGH injection include the following:

For patients with severe levels of age-related HGH loss, only genuine HGH injections will suffice to bring the HGH levels back into the more normal range and alleviate the symptom associated with growth hormone deficiency.

For patients with less severe HGH loss who may qualify for HGH peptide therapy, we recommended sermorelin over ipamorelin therapy, as we have found it to be the more effective of the two at raising HGH levels.