The somatotropic cells in the anterior pituitary gland produce, store, and secrete somatotropin upon receipt of signals from the hypothalamus. It is growth hormone-releasing hormone (GHRH) that provides those signals. Then, the somatotrophs release growth hormone into the bloodstream in pulsatile bursts an average of every three to five hours. Once in the bloodstream, GH races to its many receptors throughout the body and the brain. When these receptor cells receive the binding signals from somatotropin, they can perform their functions. If the pituitary gland does not provide enough GH, the actions of the growth hormone receptors will remain dormant or in reduced strength.

Some of the crucial functions of growth hormone (and Omnitrope) include:

As with all brands of recombinant HGH, Omnitrope is safe to use when prescribed by a doctor to treat adult GHD. It is not meant for use by athletes, bodybuilders, or those looking to prevent aging. Omnitrope is not an anti-aging miracle or the fountain of youth. Its purpose is to increase the level of growth hormone in the body for those with a deficiency. Having too much GH can be as bad for one’s well-being as having too little. Hormone levels require proper balance for the healthy functioning of the body, and as such, are part of a complex therapy designed to return the body to a state of homeostasis.

Below, we undercover full information for safe and effective usage of Omnitrope HGH injections:

What is Omnitrope, and what does it do for adults?

Omnitrope is a bioidentical hormone medication that contains the same 191 amino acids in a single chain as natural somatotropin. Having the same molecular structure allows the body to utilize it in the same way as it would the growth hormone secreted by the pituitary gland. Omnitrope carries out all the same functions as GH.

When is Omnitrope indicated for use by adults? Most adults who experience the symptoms of GHD will exhibit the following signs:

Are there any side effects or adverse reactions from Omnitrope?

Any medication can cause side effects, especially if misused. Omnitrope is an extremely safe form of hormone replacement therapy. However, if it is abused, overused, or misused, it can lead to elevated growth hormone levels – the primary cause of side effects. The most common reaction experienced by adults using Omnitrope is some form of irritation, redness, itching, or swelling at the injection site. That issue is a short-term reaction that typically goes away on its own within a short time.

Other potential side effects of HGH include:

In some cases, adults may require closer supervision of preexisting health conditions or prescribed medication levels. Tell the prescribing doctor if any of the following apply before beginning treatment with Omnitrope:

Are there any medications that can interact with Omnitrope?

Tell the doctor about any medications and supplements taken, especially the following drugs which could interact with Omnitrope:

Omnitrope is a safe form of hormone replacement therapy when used as directed. 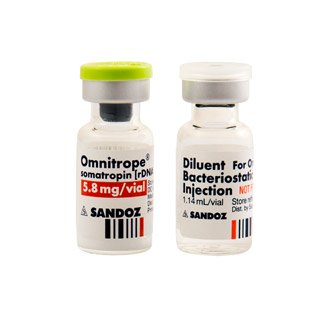 Detailed Instructions for Use

Provided below are the three ways of purchasing Omnitrope HGH, as well as answers to questions about the medication’s usage.

How do I know how much Omnitrope to take?

The doctor determines the dosage of Omnitrope for each individual based on the level of hormone deficiency, gender, age, body composition, and health. Take only as much Omnitrope as the doctor prescribes.

How do I store Omnitrope HGH?

How long will my Omnitrope HGH last?

Omnitrope cartridges last for 28 days following the first injection.  Even if there is some solution left in the cartridge at that time, it should be properly discarded and not used. Omnitrope vials are good for only 21 days after reconstitution.

How is Omnitrope supplied?

Sandoz provides Omnitrope in both pen and vial formats. The Omnitrope pen device comes in 5 and 10 mg strengths. Omnitrope pens utilize prefilled and premixed replaceable cartridges. There are also Omnitrope 5.8 mg vials that use insulin syringes and needles. Only the Omnitrope that comes in the 5.8 mg vial requires reconstitution.

Omnitrope is easy to use and administer for once daily HGH injections.

Some pharmaceutical manufacturers offer patient assistance programs or co-pay support. Our medical advisors work with our clients to determine if they qualify for any of the programs provided by the pharmaceutical companies that produce human growth hormone injections.

Sandoz, a subsidiary of Novartis, produces one of the most affordable brands of HGH injections. That is why Omnitrope is so popular with adults who must pay out-of-pocket for this medication. Most insurance companies today do not cover HGH therapy for adults. It is the mission of our hormone clinic to find affordable treatment options for all our clients.

Please contact us for a free phone consultation to learn more about hormone replacement therapy and Omnitrope HGH injections.